Posted by Brendon Walsh on 8 December 2017 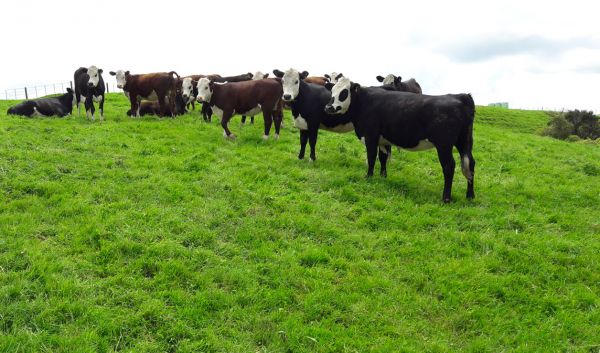 Recent comments by a famous movie producer join several others in saying that livestock farming is detrimental to our way of life and is harming the planet. “It needs to reduce” they say. “More plant proteins are needed.” They have valid points about some current and historical effects being harmful and they do seem to have the long-term sustainability and survival of our world and our species at heart. But is it because livestock farming full stop is the real problem, or is the real problem more about HOW we are doing it?

I don’t claim to have all the answers for the survival of our species by any means, but I do know how to help sheep and beef farmers find and implement their own answers about how to farm in a way that works with nature AND makes a decent profit. This means we can keep delivering great results and value to ourselves, our families, our communities, our environment and our country. So, it makes sense to me that the problem it is more about “how” livestock farming is carried out, not the fact that we are farming livestock.

Animals roamed the earth long before any humans appeared on the scene, nurturing the planet so that we humans could later become part of the system. Early humans learned how to “farm” livestock, so they (and the livestock) survived and multiplied. The planet thrived! For centuries, roving herds have grazed and moved on, thereby refreshing areas of grassland and allowing diversity to flourish.

But somewhere along the way, humans overdid it and we have ended up with some real issues. Some waterways are polluted (although not always by farming activities), and some land is being thrashed. It would seem many have pushed past the point of sustainable farming through practices and stocking rates that are too high at the wrong times for nature to sustain in a healthy state.

Why has this happened? One definite answer - unchecked actions based on false paradigms without accounting for the capacity of natural systems. There are others too. But that’s no reason to say the whole thing is stuffed.

Some farmers are quietly getting on with slotting smartly in with nature and even building the capacity of nature to keep delivering for them. Soil organic matter is being built and soil life is being enhanced. Management decisions are genuinely accounting for a range of aspects, including personal, social, financial, animal, environmental, physical, mental, emotional and spiritual aspects. In turn, nature is allowing some great results production-wise as well as nice amounts of spare cash (essential for a business). Historical and current results prove that. But why are only some doing this, and not others?

Those doing it are just getting on with it. They don’t go and upset the environment, so they aren’t necessarily seen. Perhaps they prefer it that way? Either way it is working nicely, and they stay out of the limelight. The decisions and actions of those farming against nature tend to result in the issues in question and they are being called out by the aforementioned individuals and groups, and rightly so!

False paradigms and assumptions around profit have tended to result in too many animals carried at the wrong times of year, or for most of the year. Stocking pressure and feed demand is often too high for what can naturally be absorbed or sustained by nature. Extra feed may be brought in and/or greater expenses are incurred e.g. more fertiliser nitrogen to apparently keep the feed up to the higher stocking rates. The availability of funds for “expansion” has seen many of these farmers want to ramp this situation up further, justified through apparently higher potential income. Basically, decisions are made and carried out in support of the false paradigms and assumptions.

I say false because this way of operating flies in the face of the genuine profit principles for sheep and beef farming, so industry results are not surprising. However, in their defence, many feel they have to do this to earn enough income to justify the large investment in the value of the land in the first place (income thinking, not profit thinking).  Unfortunately, as a result soils become overloaded beyond their natural capacity, pasture covers are low, animals are not optimally fed, nutrient leaching and sediment loss occurs, and waterways become polluted. Animal health can suffer and people work harder and harder, getting closer to the point of exhaustion. Is it any wonder we have high depression and suicide rates in agriculture?

How is this good? Well, input suppliers and lenders do well in the short term. It may also increase farm values (due to unsustainably high carrying capacities), so investors can do well due to farm sales after the values have risen. More money may flow through local economies due to the higher expenditure. It all works well if left unchecked, without incentive to not do it. That is, until the effects of pushing nature’s capacity too far are not acceptable any more. People then make big statements about the degradation of the environment in social media and others get on the band wagon. Plus, rural health and wellbeing suffer, a topic which finds its way into the collective consciousness and that becomes unacceptable too.

If farmers continue striving to lift production WITHOUT accounting for the true profit, environmental and social effects of that, it is only logical that problems occur! What does it take for us humans to learn? Do we have to try and prove over and over that we can make it, only to find we have gone too far? Do we have to hold tight to these false assumptions and paradigms even when it’s clear that our track is not a positive one?

As proven by those just quietly getting on with it, profit is there to be made at the same time as building the capacity of nature to keep delivering value. To say that livestock farming is the problem only blinds us to the real truth. Yes, it is easy to let emotion take hold and add to the momentum of misinformation, but going off half-cocked helps no-one.

When farmers crack onto to implementing real profit principles, they don’t need to go near the issues we are now hearing about regularly. The proven pathway is there right now, and has been for some time. Done well, livestock farming is a serious part of the solution. Done poorly, it is part of the problem and that only feeds the collective contrary voice out there. Which will you choose?

If you are curious about how the GrowFARM® System helps sheep and beef farmers take control of their businesses and unlock their potential, contact me here.